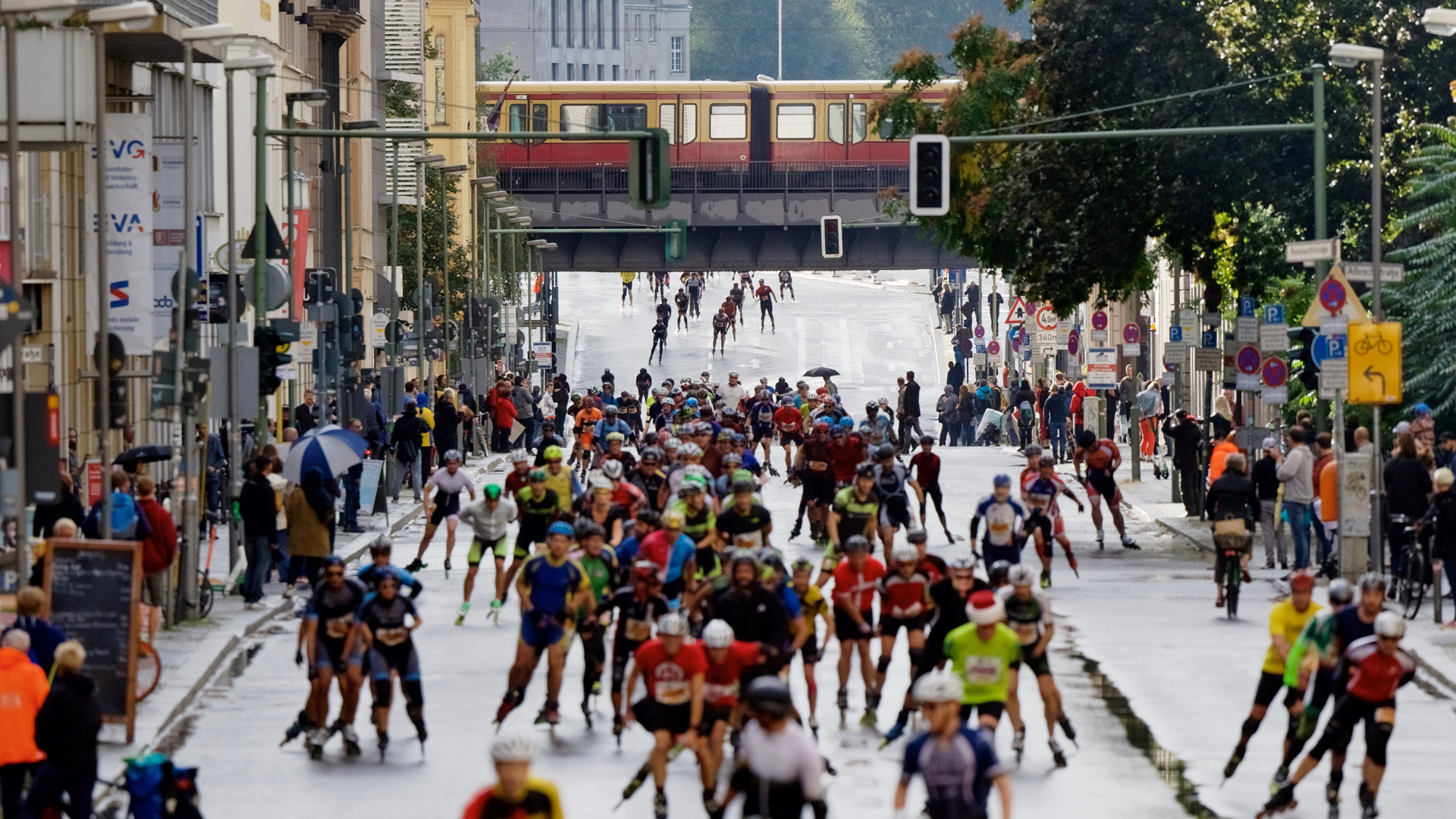 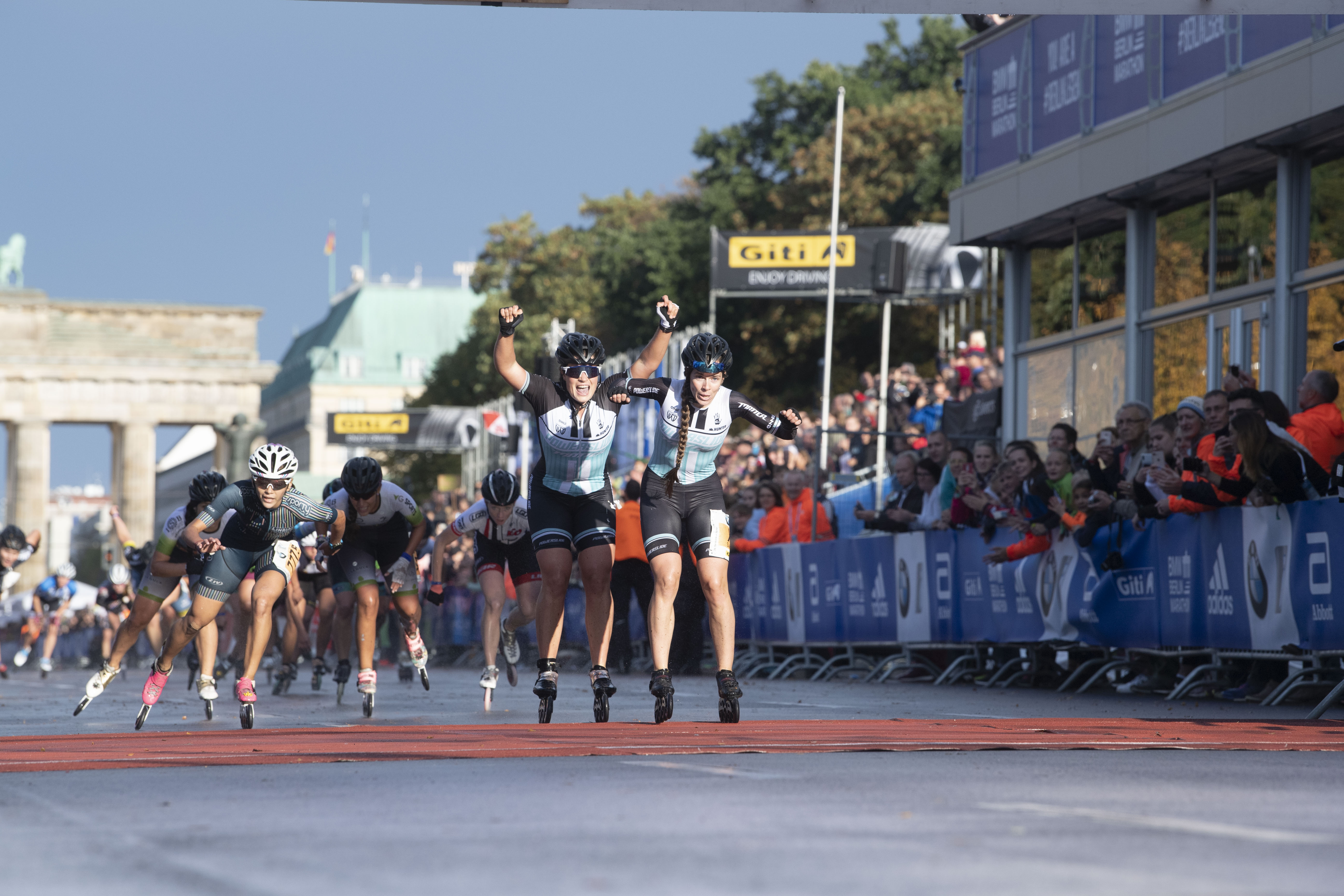 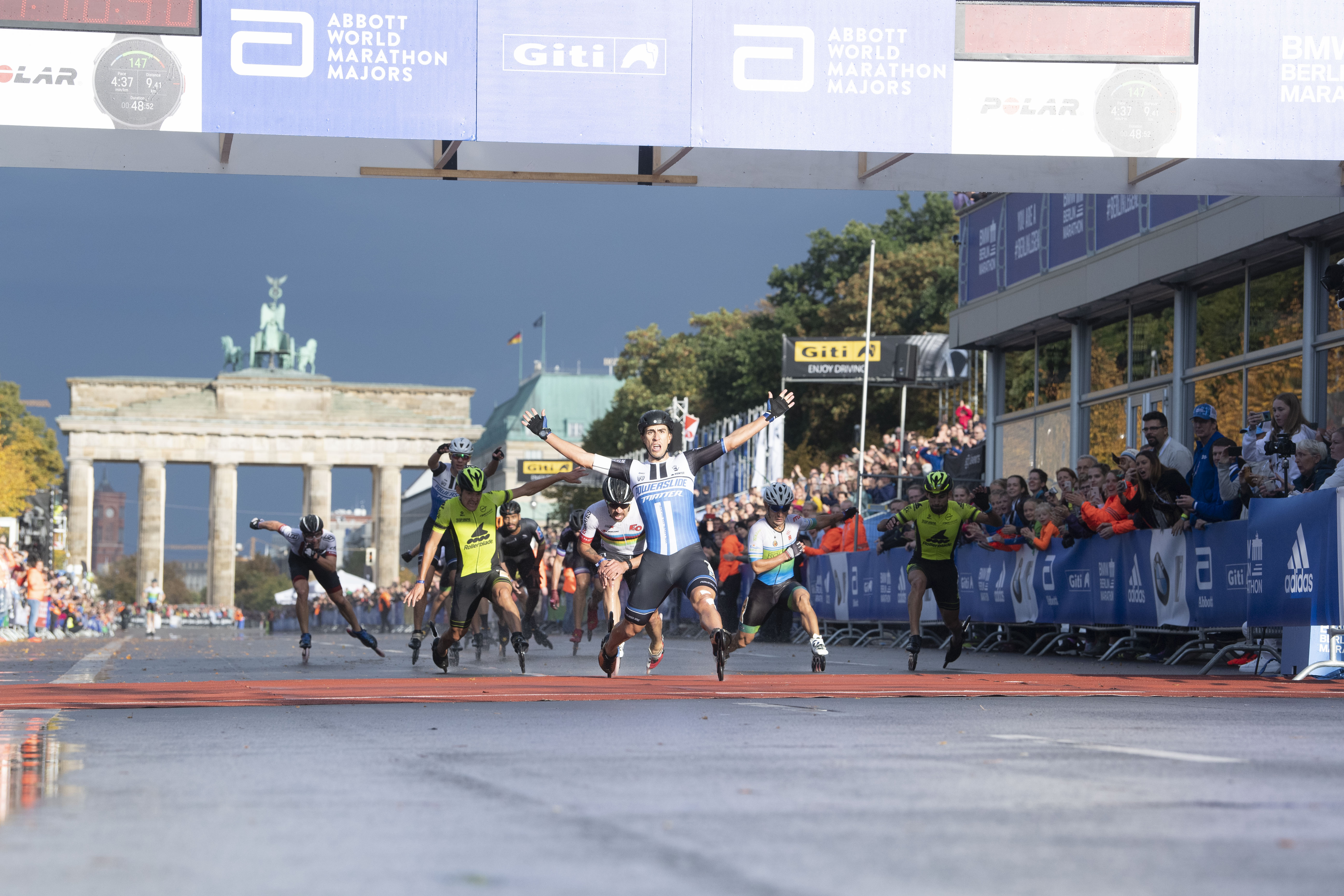 Felix Rijhnen from Darmstadt has won the 46th BMW BERLIN-MARATHON Inline Skating and is thus the first German winner in the history of the world’s most important marathon race. In the women’s event, Sandrine Tas from Belgium won ahead of last year’s German winner Katharina Rumpus. Despite heavy rain showers, more than 5,000 inline skaters celebrated a party on skates. “It was simply a great feeling to win such a crazy race”, Felix Rijhnen (Powerslide Matter World Team, 1:10:30 hours) said after his victory.

Just before the start, heavy rain showers caused the race to be postponed. The roads were wet and slippery for the athletes. That caused the leading group of men to continuously shrink along the course. “In such conditions, it is hardly possible to close the gap again. The scramble in the field was correspondingly high, because every skater wanted to skate as far in front as possible”, Rijhnen described the race. He reached the home straight in a field of 15 drivers. In the final sprint, he also benefited from the fact that he had Bart Swings, another skater from his team, in the field, who set out on a very early final sprint and led it initially. “When I saw that Nolan was passing Bart, I gave everything I had to overtake him,” said Rijhnen, who on the home straight was about two metres ahead of the Frenchman Nolan Beddiaf (EOSKATES World Team, 1:10:30 hours). Third place went to Elton De Souza (CASTELLON SPAIN ROLLER MARATHON, 1:10:30 hours), just behind the finish line. Series winner Swings finished fifth.

A triumph for the history books
Felix Rijhnen’s victory is spectacular in several respects: after six years, he ended the winning streak of Bart Swings, who has held the spot at the top of the podium every year since 2013. At the same time, the 29-year-old from Darmstadt is the first German man to win the BMW BERLIN-MARTATHON. And not only that. Rijhnen, who finished third in 2012 and 2017, is the only German man to ever climb to the top step of the podium of the world’s most important marathon.

Sandrine Tas and Katharina Rumpus excel through teamwork
“I felt very good today and we worked together perfectly as a team,” commented the Belgian Sandrine Tas (1:25:49 hours), who won the race along the Spree River in 2015. Her teammate from the Powerslide Matter World Team, Katharina Rumpus (1:25:49 hours), followed her in second place; last year the order was reversed. “You had to be very careful in the curves today, even the break-out attempts were difficult, as the conditions changed often depending on the surface,” says Tas. Rumpus had a moment of shock at kilometre eight. She crashed, but managed to get back into the field. “I had so much adrenaline in my blood that I didn’t feel the pain,” explained the skater from Darmstadt. After the peloton reached the final metres, Tas and Rumpus managed to get into the best position and win the sprint. Yi-Hsuan Liu from Taiwan (1:25:49 hours) finished third.

Backwards skating record
Tõnis Paalme from Estonia finished the race as the new record holder of the Guinness World Records title “Fastest backwards marathon on inline skates”. The 35-year-old founder of an inline skating school completed the entire course backwards. With a time of 1:38:40 hours, he beat the previous record by almost a minute! The record judge Lena Kuhlmann commented: “We are very happy that Tõnis did not lose any speed despite the heavy rain and clearly reached the finish line as the new Guinness World Records record holder”.

The day started with the stars of tomorrow Still under perfect sunny skies, the youngsters were the first to go out on the course today. As part of the SCC Skating event, 115 kids from age three to 13 years demonstrated what the future holds in front of the Brandenburg Gate. The leisure and fitness skaters were not deterred by the difficult conditions, either. Despite wet roads, there were no serious falls. Their excitement about fast skating sport was clearly noticeable at the finish. Due to technical problems, the livestream did not work today on the website of SCC EVENTS at the beginning of the race. The race recording is available on the SCC EVENTS Youtube channel.