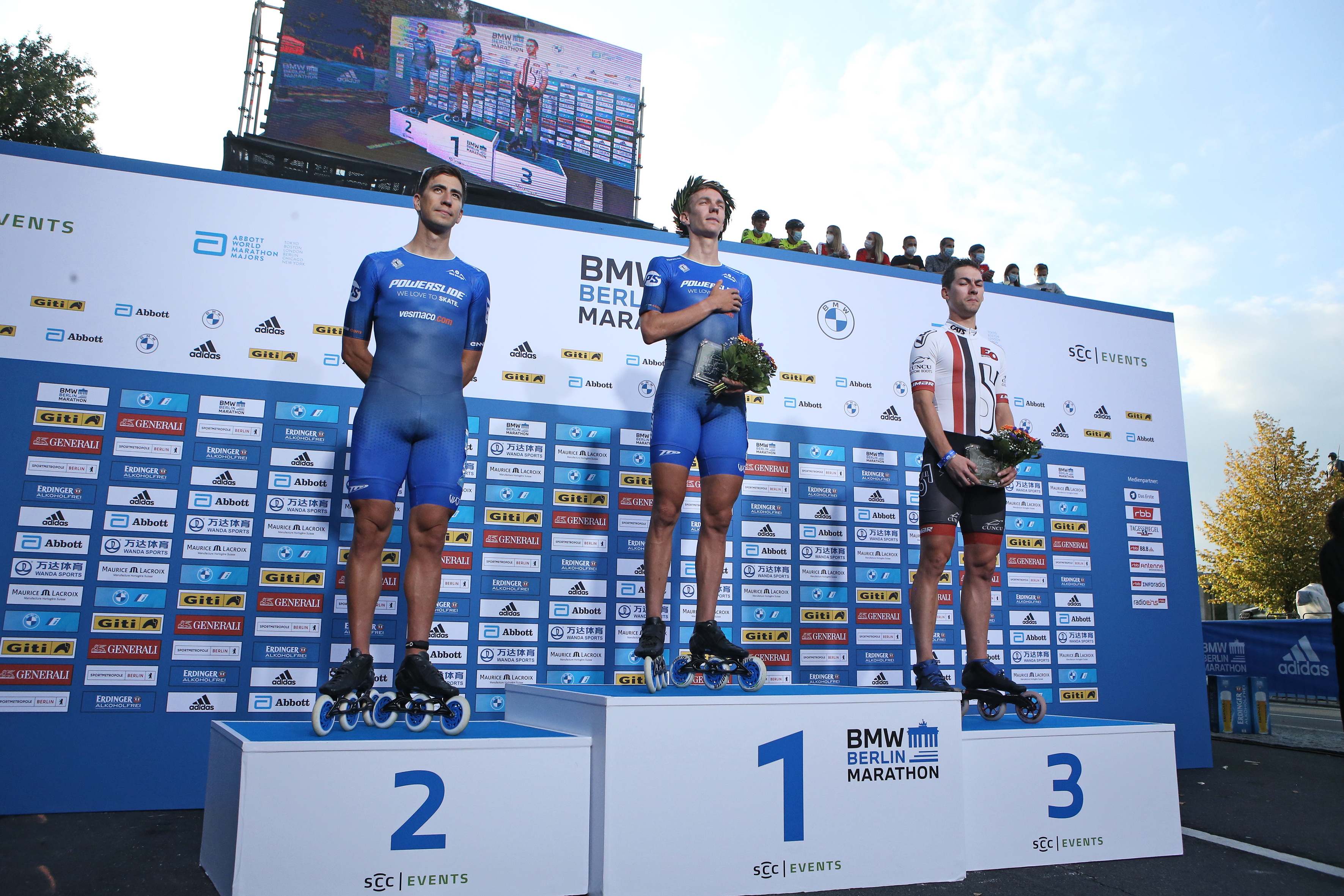 "I have to learn my own records. I didn't know I was so close to my course record from 2015," admitted Swings (POWERSLIDE MATTER WORLD), who finished in 56:50 minutes, missing his own record from 2015 by one second. "The race was extremely tough. Already from kilometer five, a group with riders from almost all teams broke away and from then on kept the pace constantly high," said Swings. Eight kilometers before the finish, he managed to break away from the leading group by sprinting and to gain a lead of more than a minute until the finish.

“Second place feels like a victory today”, said Felix Rijhnen (Powerslide Matter/58:04 min). He decided the sprint of the chasers for himself. "Standing at the start as defending champion with bib number 1 today meant for me to carry a few extra kilos on my shoulders," summed up the 2019 winner after the race. Third place went to Martin Ferrié (EOSKATES WORLD TEAM/58:04 min.) from France. In addition, Jason Suttels (POWERSLIDE MATTER WORLD/58:05 min.), who is only 20 years old, attracted attention when he crossed the finish line in fifth place. The Belgian is currently regarded as one of the greatest young talents and is traded as a future Bart Swings. The veteran himself will be back on the ice in full from Monday to prepare for the Olympic Games in Beijing.

Sandrine Tas also wants to secure a ticket for Beijing in the coming weeks on the ice. At today's inline marathon, she showed herself in top form on rollers. After 2015 and 2019 she won for the third time and confirmed together with Katharina Rumpus (both POWERSLIDE MATTER INTERNATIONAL) that inline skating is a real team sport. "I know I can rely 100 percent on Katharina and depending on how the race goes, we decide how to tactic," Tas said. As strong sprinters, Tas and Rumpus relied on a bunch sprint, which they won by a razor-thin margin. In total, four riders finished at the same time in 1:13:40 hours. The third-place finisher is Aura Cristina Quintana Herrera (COL/NL WORLD TEAM), with Giogia Bormida (ITA/ POWERSLIDE MATTER INTERNATIONAL) taking fourth place.

Overall winners in the WORLD- and GERMAN INLINE CUP

As in the years before, the race was also the final of the two most important race series. In the WORLD INLINE CUP (WIC) the overall ranking in the men's race resembled today's finish: Bart Swings ahead of Felix Rijhnen and Martin Ferrié. In women's race, marathon winner Sandrine Tas also took the overall victory in the WIC. In second and third place Valentina Letelier Cartagena (MEX/AC ROLLER TEAM) and Marine Lefeuvre (FRA/EOSKATES WORLD TEAM).

Swiss Nicolas Iten caused a sensation in the GERMAN INLINE CUP (GIC). He won the overall victory ahead of Felix Rijhnen and Severin Widmer (CH). Iten, winner of the BMW BERLIN-MARATHON 2007, ended his professional career many years ago.

Fitness skaters celebrate # restartskating on the streets of Berlin

After months of not competing, the starting signal for the skaters at the BMW BERLIN-MARATHON banged punctually at 15:30. The almost tangible emotionality in the starting blocks reflected how eagerly this moment was awaited. Even though everyone wore their masks in accordance with the hygiene concept and kept their distance, the joy of the communal experience was omnipresent. When the start gate was then animated in rainbow optics, the # restartstakting had fully arrived on the streets of Berlin. Through the start gate shining in the colors of the rainbow SCC EVENTS sent together with the participants and partners a visible sign for cosmopolitanism, tolerance and acceptance into the world. Values for which the BMW BERLIN MARATHON and its endurance sports community have stood for years.

40th GENERALI BERLIN HALF MARATHON before a sport-historical comeback

Kenenisa Bekele at the BMW BERLIN-MARATHON

SCC EVENTS is planning the BMW BERLIN-MARATHON with up to 35,000 participants